A fleeting moment in time 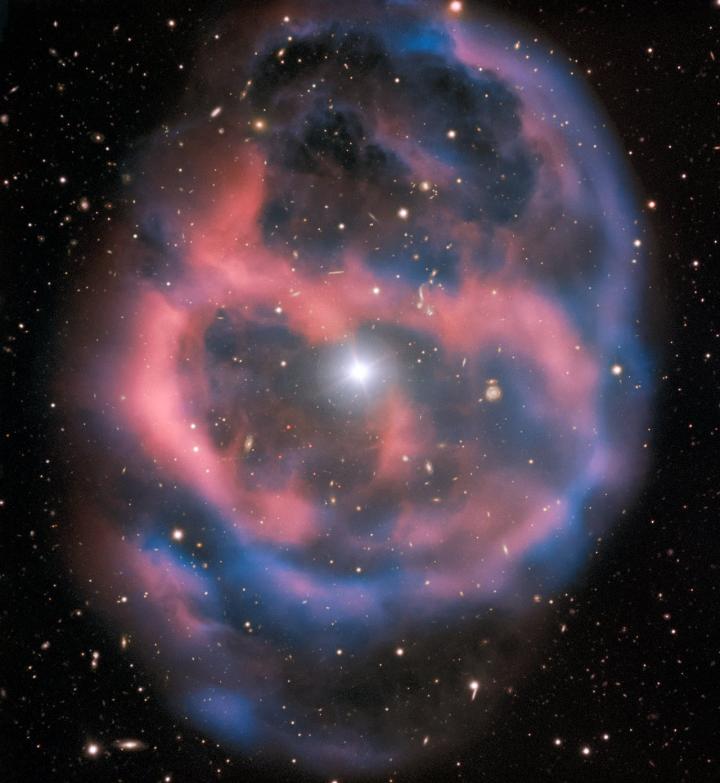 An evanescent shell of glowing gas spreading into space — the planetary nebula ESO 577-24 — dominates this image [1]. This planetary nebula is the remains of a dead giant star that has thrown off its outer layers, leaving behind a small, intensely hot dwarf star. This diminished remnant will gradually cool and fade, living out its days as the mere ghost of a once-vast red giant star.

Red giants are stars at the end of their lives that have exhausted the hydrogen fuel in their cores and begun to contract under the crushing grip of gravity. As a red giant shrinks, the immense pressure reignites the core of the star, causing it to throw its outer layers into the void as a powerful stellar wind. The dying star’s incandescent core emits ultraviolet radiation intense enough to ionise these ejected layers and cause them to shine. The result is what we see as a planetary nebula — a final, fleeting testament to an ancient star at the end of its life [2].

This dazzling planetary nebula was discovered as part of the National Geographic Society ?–?Palomar Observatory Sky Survey in the 1950s, and was recorded in the Abell Catalogue of Planetary Nebulae in 1966 [3]. At around 1400 light years from Earth, the ghostly glow of ESO 577-24 is only visible through a powerful telescope. As the dwarf star cools, the nebula will continue to expand into space, slowly fading from view.

This image of ESO 577-24 was created as part of the ESO Cosmic Gems Programme, an initiative that produces images of interesting, intriguing, or visually attractive objects using ESO telescopes for the purposes of education and public outreach. The programme makes use of telescope time that cannot be used for scientific observations; nevertheless, the data collected are made available to astronomers through the ESO Science Archive.

[1] Planetary nebulae were first observed by astronomers in the 18th century — to them, their dim glow and crisp outlines resembled planets of the Solar System.

[2] By the time our Sun evolves into a red giant, it will have reached the venerable age of 10 billion years. There is no immediate need to panic, however — the Sun is currently only 5 billion years old.

[3] Astronomical objects often have a variety of official names, with different catalogues providing different designations. The formal name of this object in the Abell Catalogue of Planetary Nebulae is PN A66 36.

ESO is the foremost intergovernmental astronomy organisation in Europe and the world’s most productive ground-based astronomical observatory by far. It has 16 Member States: Austria, Belgium, the Czech Republic, Denmark, France, Finland, Germany, Ireland, Italy, the Netherlands, Poland, Portugal, Spain, Sweden, Switzerland and the United Kingdom, along with the host state of Chile and with Australia as a Strategic Partner. ESO carries out an ambitious programme focused on the design, construction and operation of powerful ground-based observing facilities enabling astronomers to make important scientific discoveries. ESO also plays a leading role in promoting and organising cooperation in astronomical research. ESO operates three unique world-class observing sites in Chile: La Silla, Paranal and Chajnantor. At Paranal, ESO operates the Very Large Telescope and its world-leading Very Large Telescope Interferometer as well as two survey telescopes, VISTA working in the infrared and the visible-light VLT Survey Telescope. ESO is also a major partner in two facilities on Chajnantor, APEX and ALMA, the largest astronomical project in existence. And on Cerro Armazones, close to Paranal, ESO is building the 39-metre Extremely Large Telescope, the ELT, which will become “the world’s biggest eye on the sky”.

* More information on the VLT – http://www.eso.org/public/teles-instr/paranal-observatory/vlt/

* Images of the VLT – https://www.eso.org/public/images/archive/search/?adv=&subject_name=Very%20Large%20Telescope

Study identifies new genes associated with the leading cause of blindness

Corals light the way to a healthy partnership