Milan, 16 June 2022 – The Appia Antica Archaeological Park (PAAA), an independent institute run by the Ministry of Culture, in partnership with the Politecnico di Milano, has launched a vast, organic and systematic surveying and digitisation project in the Park territory with the aim of creating a modern geographic atlas that takes the form of a ‘living digital twin in 4D’. The model is designed for experts, curators and users, to be developed and monitored over time. 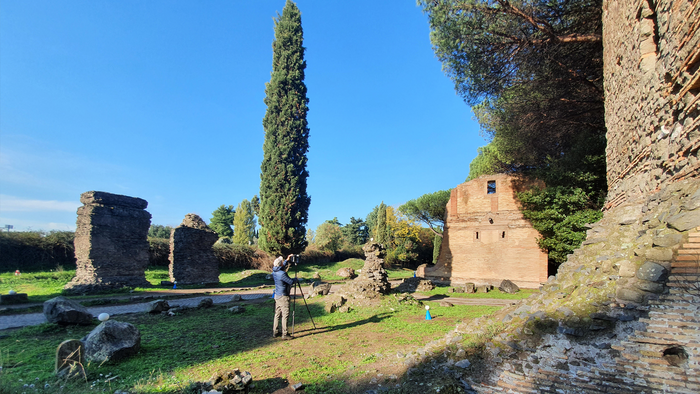 Milan, 16 June 2022 – The Appia Antica Archaeological Park (PAAA), an independent institute run by the Ministry of Culture, in partnership with the Politecnico di Milano, has launched a vast, organic and systematic surveying and digitisation project in the Park territory with the aim of creating a modern geographic atlas that takes the form of a ‘living digital twin in 4D’. The model is designed for experts, curators and users, to be developed and monitored over time.

The work is carried out by the interdisciplinary survey and representation laboratory GIcarus-ABCLab (HBIM-GIS-SDI-XR) at the Politecnico di Milano under the coordination of the PAAA.

The PAAA (established in 2016) is “a territory of extraordinary interest that represents the largest protected urban area in Europe, with 4,500 hectares of landscape home to a series of archaeological areas along more than 10 miles of the Via Appia Antica ‘Regina Viarum’: a true open-air museum; a world heritage site that is preparing for UNESCO candidacy,” says Simone Quilici , director of the PAAA of the Ministry of Culture.

“In less than a year, we digitised the first Roman complexes and infrastructures: the Claudius-Anio Novus Imperial Aqueduct (segment in Tor Fiscale), a 7.3 mile section of the Via Appia Antica (from Capo di Bove to Frattocchie), the Tomb of Cecilia Metella, the Imperial Villa of the Quintili, as well as some museum sculptures for virtual relocation,” adds Stefano Roascio , PAAA archaeologist responsible for the Cecilia Metella and Acquedotto Claudio complexes.

The result is a first real ‘4D digital geographic atlas’ of over 200,000 images, as well as 20 Tera of data and models, from which to extract information related to the three-dimensional models generated for all the complexes surveyed and georeferenced in the Park’s geographical space.

“A living digital twin,” says Raffaella Brumana from the GIcarus ABCLab at the Politecnico di Milano, “spanning past and future time to n-dimensions, made up of information models to support conservation projects and monitoring, seismic vulnerability plans, connectable to wifi IOT sensors. It is implementable, updatable and searchable, and allows us to make synchronic and diachronic correlations and adds knowledge as it grows in size. It can be re-used for content dissemination and interactive, immersive and remote use.”

The model proposed by the Politecnico di Milano goes beyond surveying. It breaks down the continuity of the surveyed space into objects. “It builds an HBIM (Heritage Building Information Modelling) model that adapts to complexity through mathematical ‘object’ modelling for individual components geared towards state-of-the-art XR (eXtended Reality) interactive environments in which form becomes knowledge,” concludes Fabrizio Banfi, researcher at the GIcarus ABCLab.

The result is a 4-dimensional (space and time) Scan-to-HBIM model gradually correlated with historical information, materials, as well as monitoring sensors, for monitoring instability and degradation over time, for structural analysis (BIM-to-FEA): associated with the GIS (Geographic Information System), the HBIM platform enables the comparison of construction techniques that have succeeded one another over the centuries, modelled down to the stratigraphic units, down to the peperino stone ashlars of aqueducts with the brick units from restorations, or down to the basolati and crepidines stones of the Appian Way; a working tool that helps to quantify area and volume of elements to support cost analyses and calculations.

One of the advantages of HBIM is that it works like a magnet over time, preventing the diaspora of information that, once you reach the fact-finding peak of research and restoration, begins an inexorable dispersion, to the detriment of future interventions and communication potential.

Thanks to new levels of interoperability, immersion and computer languages, the project envisages the development of an interactive XR platform for the remote dissemination (VR-AR-MR) of all content,which will be tested as the digitisation products become available, and will also enable the virtual relocation of local and distant collections, digitised sculptures, and the simulation of missing portions based on the findings surveyed to aid understanding with a station at the Villa dei Quintili.

All activities, for the respective areas of expertise, were coordinated by the Director of the PAAA Simone Quilici , together with the park’s technical and scientific staff, in particular archaeologists Stefano Roascio, Francesca Romana Paolillo , architects Luigi Oliva, Clara Spallino, Aura Picchione, Michele Reginaldi and Raffaella Rocchetta, and restorer Sara Iovine.