A dam right across the North Sea

A defense against climate change, but primarily a warning 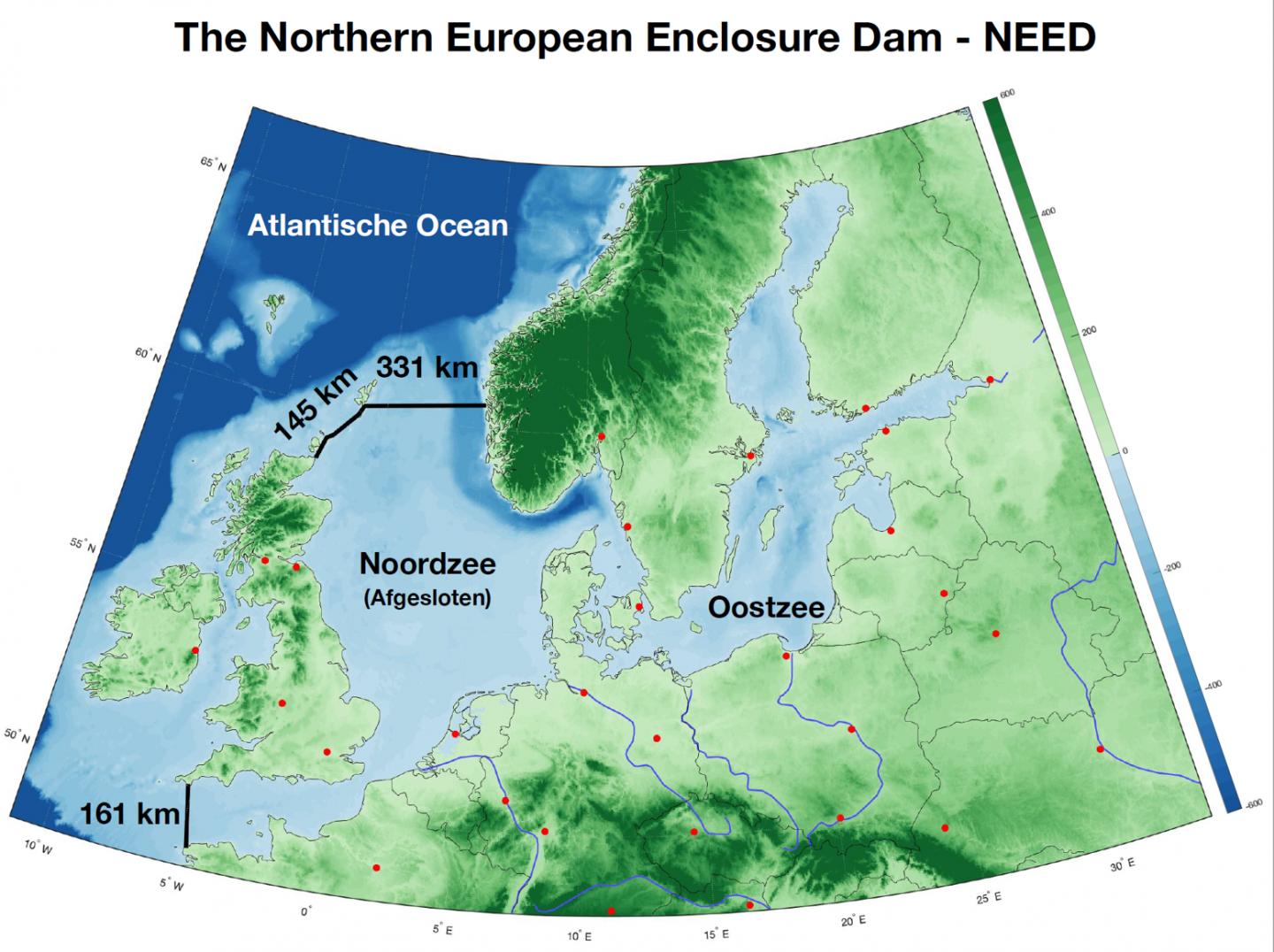 A 475-km-long dam between the north of Scotland and the west of Norway and another one of 160 km between the west point of France and the southwest of England could protect more than 25 million Europeans against the consequences of an expected sea level rise of several metres over the next few centuries. The costs, 250-500 billion euros, are “merely” 0.1% of the gross national product, annualy over 20 years, of all the countries that would be protected by such a dam. That’s what Dr Sjoerd Groeskamp, oceanographer at the Royal Netherlands Institute for Sea Research, calculated together with his Swedish colleague Joakim Kjellson at GEOMAR in Kiel, Germany, published this month in the scientific journal the Bulletin of the American Meterological Society. ‘Besides being a possible solution, the design of such an extreme dam is mainly a warning’, says Groeskamp. ‘It reveals the immensity of the problem hanging over our heads.’

‘The construction of such a “North-European Enclosure Dam” seems to be technically feasible’, Groeskamp emphasises. ‘The maximum depth of the North Sea between France and England is scarcely one hundred metres. The average depth between Scotland and Norway is 127 metres, with a maximum of 321 metres just off the coast of Norway. We are currently able to build fixed platforms in depths exceeding 500 metres, so such a dam seems feasible too.’

The authors acknowledge that the consequences of this dam for North Sea wildlife would be considerable. ‘The tide would disappear in a large part of the North Sea, and with it the transport of silt and nutrients. The sea would eventually even become a freshwater lake. That will drastically change the ecosystem and therefore have an impact on the fishing industry as well’, Groeskamp elaborates.

‘We estimated the financial costs for the construction of the dam by extrapolating the costs for large dams in South Korea, for example. In the final calculation, we must also take into account factors such as the loss of income from North Sea fishing, the increased costs for shipping across the North Sea and the costs of gigantic pumps to transport all of the river water that currently flows into the North Sea to the other side of the dam.’

Ultimately, the description of this extreme dam is more of a warning than a solution, Groeskamp states. ‘The costs and the consequences of such a dam are huge indeed. However, we have calculated that the cost of doing nothing against sea level rise will ultimately be many times higher. This dam makes it almost tangible what the consequences of the sea level rise will be; a sea level rise of 10 metres by the year 2500 according to the bleakest scenarios. This dam is therefore mainly a call to do something about climate change now. If we do nothing, then this extreme dam might just be the only solution.’