A cosmic bat in flight 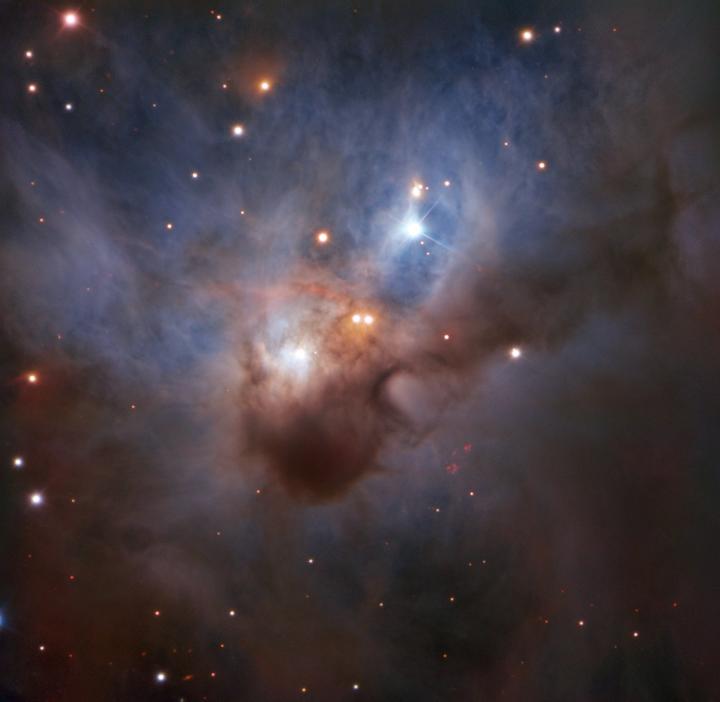 ESO’s Very Large Telescope (VLT has caught a glimpse of an ethereal nebula hidden away in the darkest corners of the constellation of Orion (The Hunter) — NGC 1788, nicknamed the Cosmic Bat. This bat-shaped reflection nebula doesn’t emit light — instead it is illuminated by a cluster of young stars in its core, only dimly visible through the clouds of dust. Scientific instruments have come a long way since NGC 1788 was first described, and this image taken by the VLT is the most detailed portrait of this nebula ever taken.

Even though this ghostly nebula in Orion appears to be isolated from other cosmic objects, astronomers believe that it was shaped by powerful [stellar winds] – from the massive stars beyond it. These streams of scorching plasma are thrown from a star’s upper atmosphere at incredible speeds, shaping the clouds secluding the Cosmic Bat’s nascent stars.

NGC 1788 was first described by the German-British astronomer William Herschel, who included it in a catalogue that later served as the basis for one of the most significant collections of deep-sky objects, the New General Catalogue (NGC) [1]. A nice image of this small and dim nebula had already been captured by the MPG/ESO 2.2-metre telescope at ESO’s La Silla Observatory, but this newly observed scene leaves it in the proverbial dust. Frozen in flight, the minute details of this Cosmic Bat’s dusty wings were imaged for the twentieth anniversary of one of ESO’s most versatile instruments, the FOcal Reducer and low dispersion Spectrograph 2?(FORS2.

FORS2 is an instrument mounted on Antu , one of the VLT’s 8.2-metre Unit Telescopes at the Paranal Observatory, and its ability to image large areas of the sky in exceptional detail has made it a coveted member of ESO’s fleet of cutting-edge scientific instruments. Since its first light 20 years ago, FORS2 has become known as “the Swiss army knife of instruments”. This moniker originates from its uniquely broad set of functions [2]. FORS2’s versatility extends beyond purely scientific uses — its ability to capture beautiful high-quality images like this makes it a particularly useful tool for public outreach.

This image was taken as part of ESO’s Cosmic Gems programme, an outreach initiative that uses ESO telescopes to produce images of interesting, intriguing or visually attractive objects for the purposes of education and public outreach. The programme makes use of telescope time that cannot be used for science observations, and — with the help of FORS2 — produces breathtaking images of some of the most striking objects in the night sky, such as this intricate reflection nebula. In case the data collected could be useful for future scientific purposes, these observations are saved and made available to astronomers through the ESO Science Archive ).

[1] In 1864 John Herschel published the General Catalogue of Nebulae and Clusters, which built on extensive catalogues and contained entries for more than five thousand intriguing deep-sky objects. Twenty-four years later, this catalogue was expanded by John Louis Emil Dreyer and published as the New General Catalogue of Nebulae and Clusters of Stars (NGC), a comprehensive collection of stunning deep-sky objects.

[2] In addition to being able to image large areas of the sky with precision, FORS2 can also measure the spectra of multiple objects in the night sky and analyse the polarisation of their light. Data from FORS2 are the basis of over 100 scientific studies published every year.

* Images of the VLT – https://www.eso.org/public/images/archive/search/?adv=&subject_name=Very%20Large%20Telescope

A peek into lymph nodes