A computational guide to lead cells down desired differentiation paths 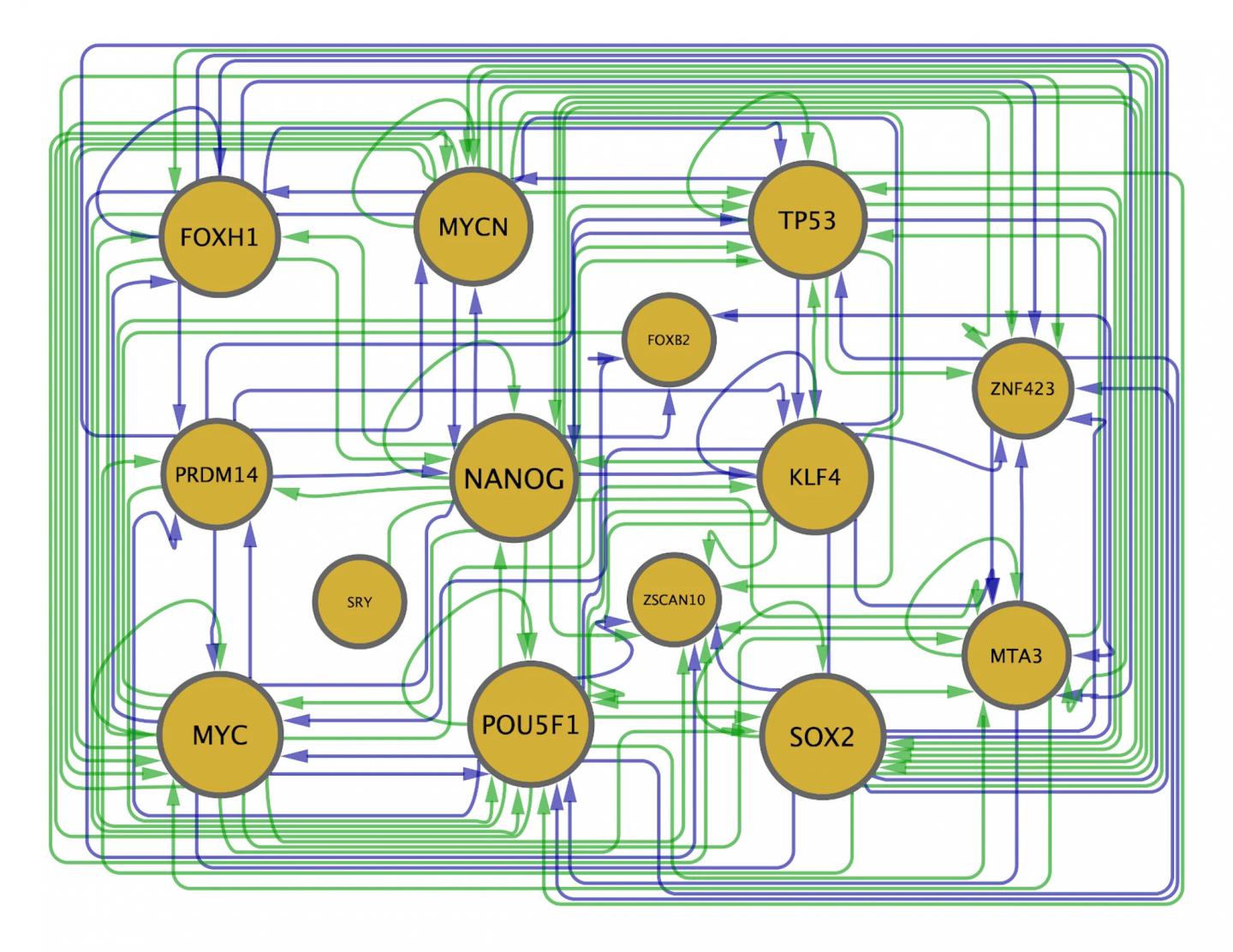 (BOSTON) — There is a great need to generate various types of cells for use in new therapies to replace tissues that are lost due to disease or injuries, or for studies outside the human body to improve our understanding of how organs and tissues function in health and disease. Many of these efforts start with human induced pluripotent stem cells (iPSCs) that, in theory, have the capacity to differentiate into virtually any cell type in the right culture conditions. The 2012 Nobel Prize awarded to Shinya Yamanaka recognized his discovery of a strategy that can reprogram adult cells to become iPSCs by providing them with a defined set of gene-regulatory transcription factors (TFs). However, progressing from there to efficiently generating a wide range of cell types with tissue-specific differentiated functions for biomedical applications has remained a challenge.

While the expression of cell type-specific TFs in iPSCs is the most often used cellular conversion technology, the efficiencies of guiding iPSC through different “lineage stages” to the fully functional differentiated state of, for example, a specific heart, brain, or immune cell currently are low, mainly because the most effective TF combinations cannot be easily pinpointed. TFs that instruct cells to pass through a specific cell differentiation process bind to regulatory regions of genes to control their expression in the genome. However, multiple TFs must function in the context of larger gene regulatory networks (GRNs) to drive the progression of cells through their lineages until the final differentiated state is reached.

Now, a collaborative effort led by George Church, Ph.D. at Harvard’s Wyss Institute for Biologically Inspired Engineering and Harvard Medical School (HMS), and Antonio del Sol, Ph.D., who leads Computational Biology groups at CIC bioGUNE, a member of the Basque Research and Technology Alliance, in Spain, and at the Luxembourg Centre for Systems Biomedicine (LCSB, University of Luxembourg), has developed a computer-guided design tool called IRENE, which significantly helps increase the efficiency of cell conversions by predicting highly effective combinations of cell type-specific TFs. By combining IRENE with a genomic integration system that allows robust expression of selected TFs in iPSCs, the team demonstrated their approach to generate higher numbers of natural killer cells used in immune therapies, and melanocytes used in skin grafts, than other methods. In a scientific first, generated breast mammary epithelial cells, whose availability would be highly desirable for the repopulation of surgically removed mammary tissue. The study is published in Nature Communications.

“In our group, the study naturally built on the ‘TFome’ project, which assembled a comprehensive library containing 1,564 human TFs as a powerful resource for the identification of TF combinations with enhanced abilities to reprogram human iPSCs to different target cell types,” said Wyss Core Faculty member Church. “The efficacy of this computational algorithm will boost a number of our tissue engineering efforts at the Wyss Institute and HMS, and as an open resource can do the same for many researchers in this burgeoning field.” Church is the lead of the Wyss Institute’s Synthetic Biology platform, and Professor of Genetics at HMS and of Health Sciences and Technology at Harvard and MIT.

Several computational tools have been developed to predict combinations of TFs for specific cell conversions, but almost exclusively these are based on the analysis of gene expression patterns in many cell types. Missing in these approaches was a view of the epigenetic landscape, the organization of the genome itself around genes and on the scale of entire chromosome sections which goes far beyond the sequence of the naked genomic DNA.

“The changing epigenetic landscape in differentiating cells predicts areas in the genome undergoing physical changes that are critical for key TFs to gain access to their target genes. Analyzing these changes can inform more accurately about GRNs and their participating TFs that drive specific cell conversions,” said co-first author Evan Appleton, Ph.D. Appleton is a Postdoctoral Fellow in Church’s group who joined forces with Sascha Jung, Ph.D., from del Sol’s group in the new study. “Our collaborators in Spain had developed a computational approach that integrated those epigenetic changes with changes in gene expression to produce critical TF combinations as an output, which we were in an ideal position to test.”

The team used their computational “Integrative gene Regulatory Network model” (IRENE) approach to reconstruct the GRN controlling iPSCs, and then focused on three target cell types with clinical relevance to experimentally validate TF combinations prioritized by IRENE. To deliver TF combinations into iPSCs, they deployed a transposon-based genomic integration system that can integrate multiple copies of a gene encoding a TF into the genome, which allows all factors of a combination to be stably expressed. Transposons are DNA elements that can jump from one position of the genome to another, or in this case from an exogenously provided piece of DNA into the genome.

“Our research team composed of scientists from the LCSB and CIC bioGUNE has a long-standing expertise in developing computational methods to facilitate cell conversion. IRENE is an additional resource in our toolbox and one for which experimental validation has demonstrated it substantially increased efficiency in most tested cases,” corresponding author Del Sol, who is Professor at LCSB and CIC bioGUNE. “Our fundamental research should ultimately benefit patients, and we are thrilled that IRENE could enhance the production of cell sources readily usable in therapeutic applications, such as cell transplantation and gene therapies.”

The researchers chose human mammary epithelial cells (HMECs) as a first cell type. Thus far HMECs are obtained from one tissue environment, dissociated, and transplanted to one where breast tissue has been resected. HMECs generated from patients’ cells, via an intermediate iPSC stage, could provide a means for less invasive and more effective breast tissue regeneration. One of the combinations that was generated by IRENE enabled the team to convert 14% of iPSCs into differentiated HMECs in iPSC-specific culture media, showing that the provided TFs were sufficient to drive the conversion without help from additional factors.

The team then turned their attention to melanocytes, which can provide a source of cells in cellular grafts to replace damaged skin. This time they performed the cell conversion in melanocyte destination medium to show that the selected TFs work under culture conditions optimized for the desired cell type. Two out of four combinations were able to increase the efficiency of melanocyte conversion by 900% compared to iPSCs grown in destination medium without the TFs. Finally, the researchers compared combinations of TFs prioritized by IRENE to generate natural killer (NK) cells with a state-of-the-art differentiation method based on cell culture conditions alone. Immune NK cells have been found to improve the treatment of leukemia. The researchers’ approach outperformed the standard with five out of eight combinations increasing the differentiation of NK cells with critical markers by up to 250%.

“This novel computational approach could greatly facilitate a range of cell and tissue engineering efforts at the Wyss Institute and many other sites around the world. This advance should greatly expand our toolbox as we strive to develop new approaches in regenerative medicine to improve patients’ lives,” said Wyss Founding Director Donald Ingber, M.D., Ph.D., who is also the Judah Folkman Professor of Vascular Biology at HMS and Boston Children’s Hospital, and Professor of Bioengineering at the Harvard John A. Paulson School of Engineering and Applied Sciences.

The study was also authored by bioinformatician Muhammad Ali, Ph.D., from the University of Luxembourg, and funded by the European Union’s Horizon 2020 research and innovation programme under grant# 643417, the FunGCAT program from the Office of the Director of National Intelligence Advanced Research Projects Activity, via the Army Research Office, under award# W911NF-17-2-0089 and the EGL Charitable Foundation. Church is a co-founder of and has equity in GC Therapeutics, which commercializes the TFome project.

The Centre for Cooperative Research in Biosciences (CIC bioGUNE) https://www.cicbiogune.es), located in the Bizkaia Technology Park, is a biomedical research organisation conducting cutting-edge research at the interface between structural, molecular and cell biology, with a particular focus on generating knowledge on the molecular bases of disease, for use in the development of new diagnostic methods and advanced therapies. CIC bioGUNE has been accredited as a “Severo Ochoa Centre of Excellence”, the highest level of recognition for centres of excellence in Spain.

The Luxembourg Centre for Systems Biomedicine (LCSB) (https://wwwen.uni.lu/lcsb) is accelerating biomedical research by closing the link between systems biology and medical research. Collaboration between biologists, medical doctors, computer scientists, physicists, engineers and mathematicians is offering new insights in complex systems like cells, organs, and organisms. These insights are essential for understanding principal mechanisms of disease pathogenesis and for developing new tools in diagnostics and therapy.