A combination of insecticides and mite weakens honeybees 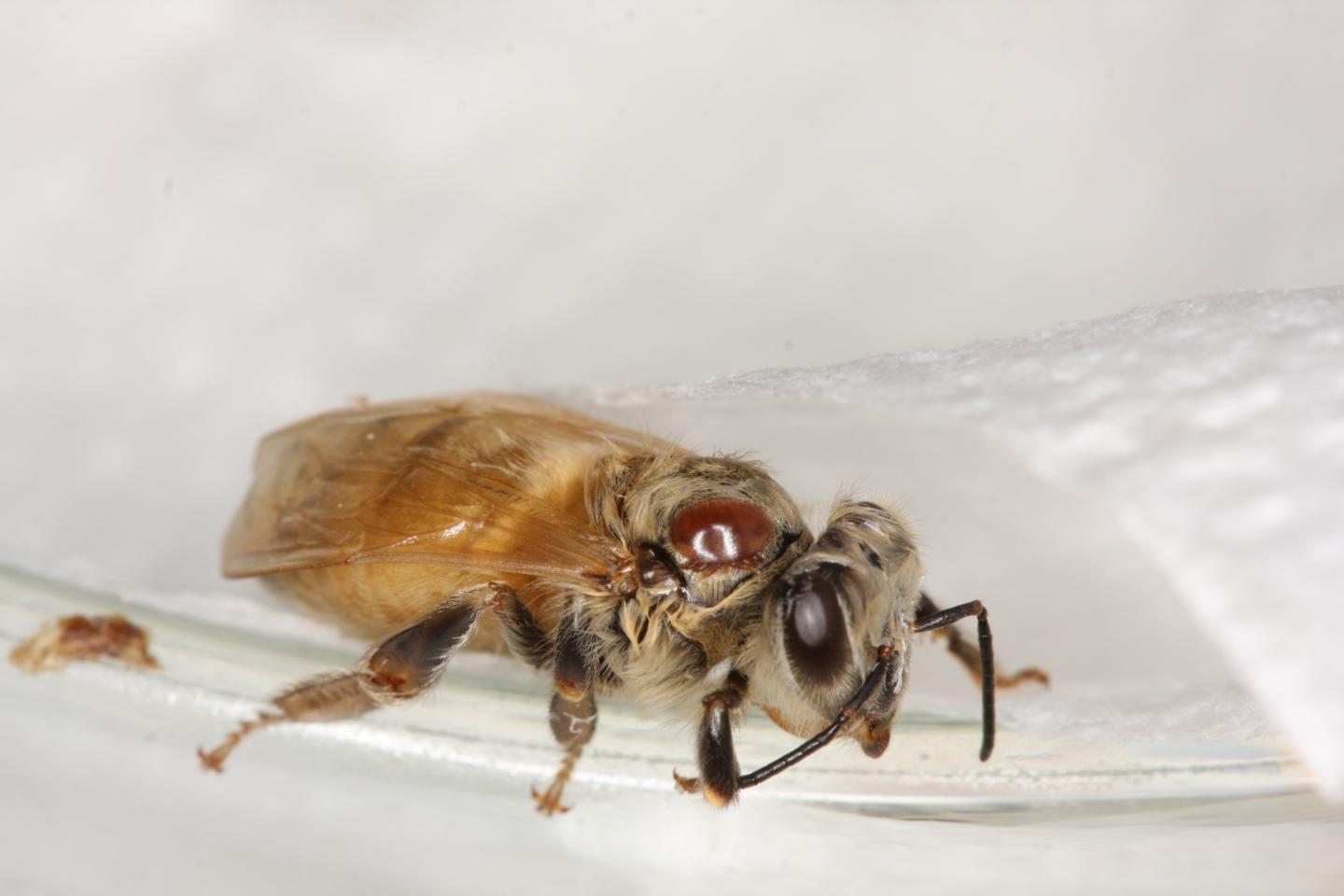 The Western honeybee is the most important managed pollinator globally and has recently experienced unsustainably high colony losses in many regions of the world. Synergistic interactions among stressors are believed to be primarily responsible. Despite the clear negative impact of certain neonicotinoids and the ubiquitous ectoparasitic mite Varroa destructor on exposed honeybees, no data existed to show synergistic effects between these two stressors.

Current data that was collected at the University of Bern and Agroscope, in cooperation with the Auburn University (USA) and Chiang Mai University (Thailand), suggest a novel possible previously overlooked mechanism for recent unsustainably high losses of managed honeybee colonies. The results were published in “Scientific Reports“, an Open-Access Journal of “Nature”. According to the authors, the study underlines the importance of developing sustainable agro-ecosystem management schemes that incorporate reduced used of neonicotinoids and sustainable solutions for V. destructor mites.

Two stressors having a clear negative impact on the health of honeybees are insecticides and the ubiquitous ectoparasitic mite Varroa destructor. These mites originated from Asia, and have switched hosts from Eastern honeybees Apis cerana to Western honeybees Apis mellifera to become the most serious biotic threat to Western honeybees globally. Similarly, there is evidence for negative impact of widely used neonicotinoid insecticides. However, no data existed so far to show synergistic effects between these two stressors.

In the present work, honeybee colonies exposed to two neonicotinoids (thiamethoxam and clothianidin) via pollen paste feeding, did not affect honeybee worker mass or longevity. However, when in combination with V. destructor infestation, a synergistic negative effect was observed. Whilst a negative synergism was observed for body mass in both summer and autumn, it was only observed for survival 16 weeks post neonicotinoid colony exposure. The revealed results suggest a previously overlooked time-lag effect of neonicotinoid exposure. Because honeybee colonies in temperate regions must produce significant quantities of long-living winter bees to survive, the observed negative synergistic effects on individual winter honeybee longevity are most likely compromising colony survivorship.

“Beekeepers in many regions of the world face losses of their colonies, which are far too high”, says Prof. Peter Neumann of the Institute of Bee Health at the University of Bern, co-author and president of COLOSS. Due to the present evidence for interactions between insecticides and mites, the authors stress the importance of developing sustainable agro-ecosystem management and varroa-management schemes. “Reduced usage of insecticides and sustainable solutions for V. destructor mites in agriculture and beekeeping are urgently required”, adds Dr. Lars Straub, first author and Post-Doc at the Institute of Bee Health.

The study was financially supported by the Swiss Federal Office for the Environment (FOEN), Agroscope, the Vinetum Foundation, the ETH Global Foundation, the Chiang Mai University, the USDA National Institute of Food and Agriculture and the Swiss National Science Foundation (SNF). The study was performed by scientists working at the University of Bern (Institute of Bee Health, Vetsuisse Faculty), Agroscope (Swiss Bee Research Centre), Auburn University, as well as Chiang Mai University and Mae Fah Luang University of Thailand.

COLOSS (Prevention of honey bee COlony LOSSes) is an international, non-profit association that focusses on improving the well-being of honey bees at a global level. COLOSS is composed of over 1200 scientific professionals that include researchers, veterinarians, agriculture extension specialists and students from >95 countries. https://coloss.org/

Scienmag Jan 29, 2020
BTI researchers develop a strain of corn that recovers much more quickly after a cold snap, which could enable…