A class of their own: New factors direct red algae chloroplast protein transport

Osaka, Japan – The oceans are often called Earth’s final frontier. Now, researchers from Japan have shown that this applies at all levels with their discovery of a new type of protein that mediates the transport of proteins into chloroplasts in Rhodophyta (reg algae). 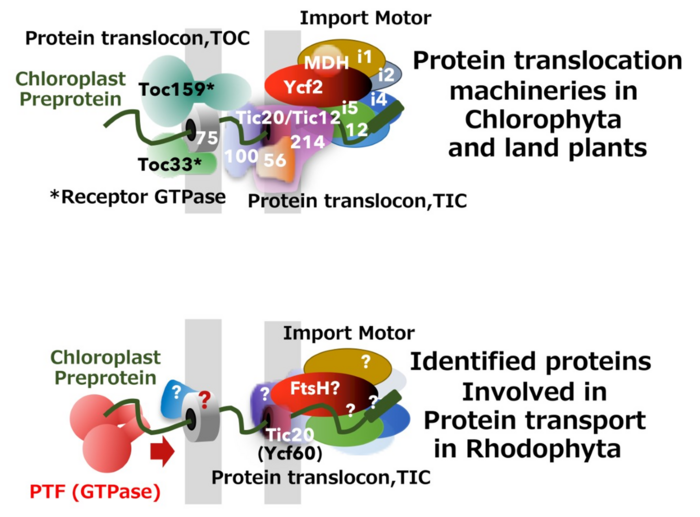 Osaka, Japan – The oceans are often called Earth’s final frontier. Now, researchers from Japan have shown that this applies at all levels with their discovery of a new type of protein that mediates the transport of proteins into chloroplasts in Rhodophyta (reg algae).

Chloroplasts are organelles (specialized cellular subcompartments) that enable plants, algae, and related organisms to photosynthesize. The Archaeplastida (a major group that contains red algae, green algae, land plants, and the glaucophytes – a group of single-celled freshwater algae) are thought to share the same chloroplast protein transport mechanisms associated with translocons. Translocons are protein complexes involved in the movement of proteins and polypeptides across envelope membranes within cells; the ones thought to be shared among the Archaeplastida are the translocons at the outer chloroplast envelope (TOC) and the inner chloroplast envelope (TIC).

“It was unclear whether the red and green algal lineages possess shared chloroplast protein import mechanisms,” says lead author of the study, Sanghun Baek. “The aim of our study was to find out about these mechanisms in red algae.” The researchers investigated these mechanisms in the red algae Cyanidioschyzon merolae, developing a new method for biochemically identifying the proteins associated with the import of other proteins into chloroplasts. These imported proteins are synthesized in the cytosol (the liquid matrix that surrounds the organelles within a cell) and transported across the outer and inner envelope membranes of chloroplasts.

“From C. merolae, we found a new targeting factor associated with the recognition of chloroplast preproteins synthesized in the cytosol, and with the way these preproteins are targeted at the outer membrane of chloroplasts,” explains Masato Nakai, senior author.

Preproteins (also known as precursor proteins) carry a so-called transit peptide for this recognition that are later to be removed after the import into chloroplasts. The study’s results indicate that red algae use mechanisms involving TIC to transport proteins across the inner membrane of chloroplasts but have kept a distinct mechanism for targeting preproteins that has been retained among the red lineages, and possibly the glaucophytes.

“We identified a distinct class of proteins that bind to guanosine-5′-triphosphate (GTP); these proteins may act as chloroplast targeting factors in red algae,” says Baek.

The results of this study could be used to boost the photosynthetic abilities of non-chlorophytic algae (algae outside the group Chlorophyta, from which land plants arose), which contribute to the production of a large proportion of marine biomass, and are also commercially farmed.