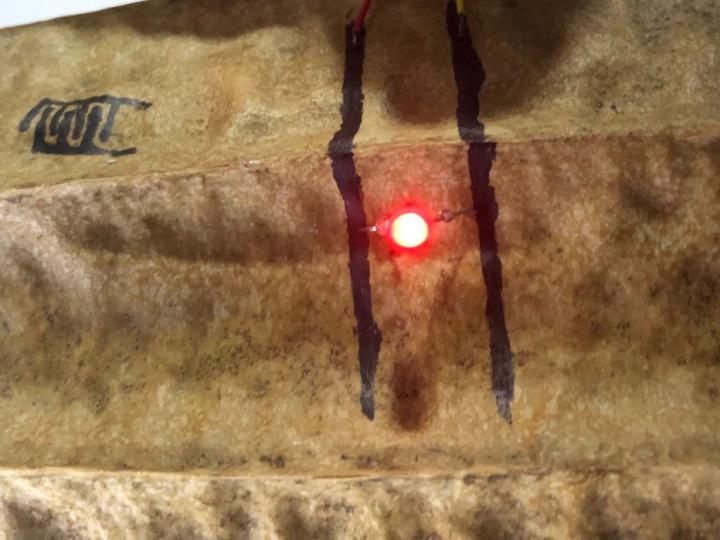 Conductive ink is a great tool for printing flexible electronic circuits on surfaces. But these inks can be costly, they do not work on some materials, and devices to apply them can plug up. Now, scientists report in ACS Applied Electronic Materials that they have developed inexpensive conductive inks for clog-free ballpoint pens that can allow users to “write” circuits almost anywhere — even on human skin.

Flexible electronics are widely used in applications such as biosensors, electronic skin and energy storage. Recent advances to produce such devices include pens that can draw circuits on surfaces, without the need for a printer. These pens can write on a variety of textures, and some can even draw on rough or irregular surfaces unsuitable for printing. However, it’s difficult to make ballpoint pens that maintain good circuit-writing performance because the tips can clog. Another challenge is that the metal inks typically used in these systems are expensive to make. And it’s unclear how stable these pens and inks are over time. So Yu Liao, Jun Qian and colleagues set out to design a cheap and effective pen-and-ink system.

Building on prior work, the scientists developed a water-based ink containing conductive carbon particles composed of graphene nanosheets, multiwalled carbon nanotubes and carbon black. Maleic anhydride modified rosin resin was added as a binder to reduce the ink’s solid content and viscosity, and xanthan gum was added to stabilize the dispersion so the carbon wouldn’t settle out of the ink. The researchers optimized viscosity and the size of the conductive particles relative to the pen tip to create a system that provided stable and smooth writing performance on both flat and irregular surfaces — even a loofah. Circuits drawn on paper with the pen withstood multiple cycles of folding without deterioration. The ink remained stable after sitting for 12 hours, released no harmful gases during use and cost much less than others reported in the literature, the researchers note. The pens could be used to draw flexible, wearable electronic devices on soft substrates or human skin.

The authors acknowledge funding from the National Natural Science Foundation of China.

The abstract that accompanies this paper is available here.