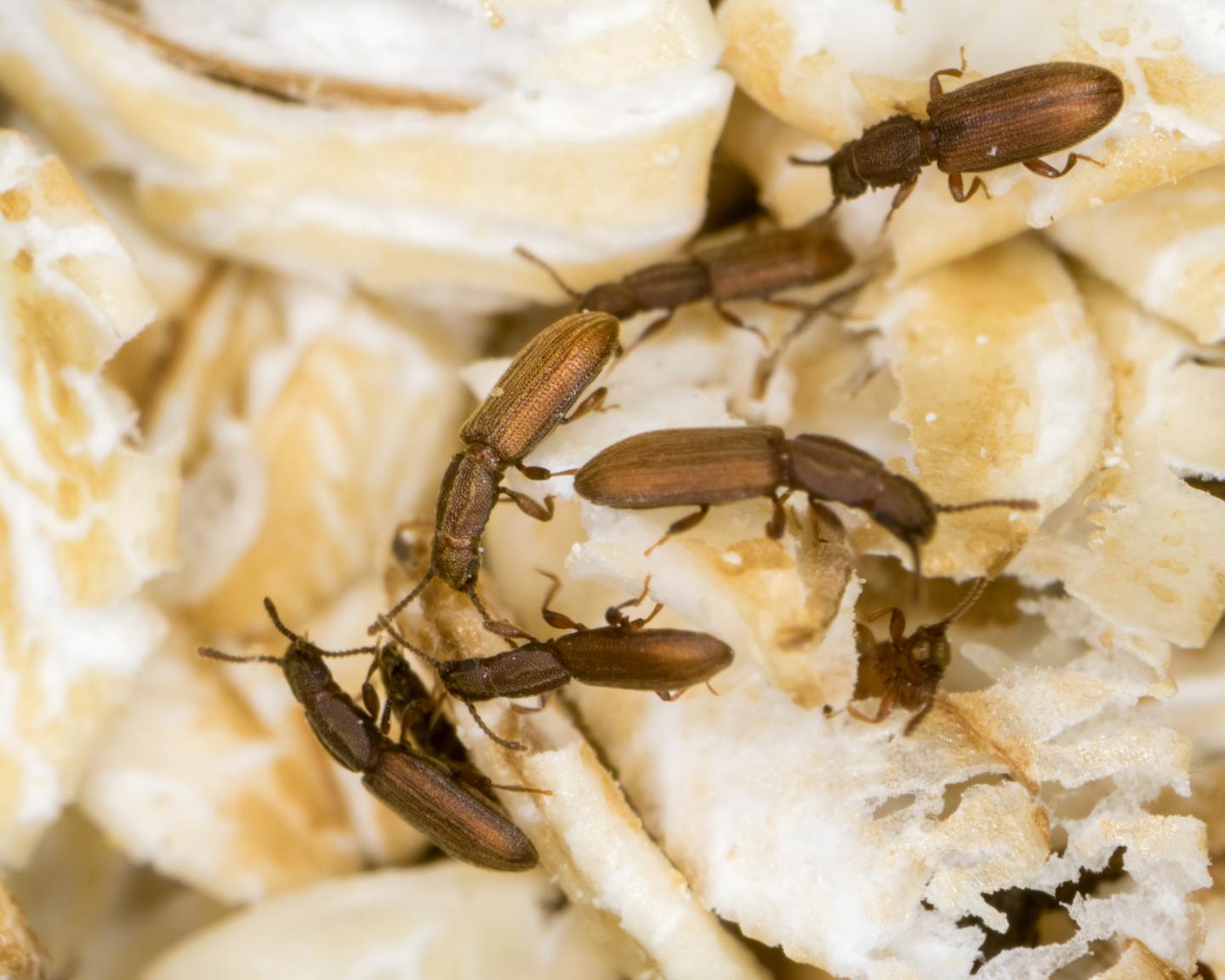 Saw-toothed grain beetles live in a symbiotic association with bacteria. Their bacterial partners provide important building blocks for the formation of the insect’s exoskeleton, which protects the beetles from their enemies as well as from desiccation. In a new study, a team of scientists from the Johannes Gutenberg University in Mainz, the Max Planck Institute for Chemical Ecology in Jena, and the National Institute of Advanced Industrial Science and Technology in Japan demonstrates that glyphosate inhibits the symbiotic bacteria of the grain beetle. Beetles exposed to the weedkiller no longer receive the building blocks they need from the bacteria. The study shows that glyphosate has the potential to harm insects indirectly by targeting their bacterial partners and thus to contribute to their decline (Communications Biology, doi: 10.1038/s42003-021-02057-6, May 2021).

Organisms exist not in isolation but in an intricate network of ecological interactions. These interactions must be kept in mind when judging the impact of human activities. Insects in particular benefit in diverse ways from microbial symbionts, mostly via supplemented nutrients and chemical defenses. However, the benefits derived from such symbiotic associations may also make the insect more vulnerable. Insect hosts often become so reliant on their microbial partners that they can hardly survive alone. Without symbiosis, insects’ development may be delayed or prevented, their susceptibility to natural enemies may be increased, their reproductive potential and competitiveness with conspecifics may be impaired, or they may die.

Glyphosate is currently one of the most widely used pesticides in agriculture, despite increasing controversy about its potentially harmful side-effects. It is supposed to selectively suppress the growth of plants by inhibiting the biosynthesis of aromatic amino acids via the so-called shikimate pathway, a metabolic pathway occurring in plants and many microorganisms. Animals, on the other hand, do not encode the shikimate pathway, and thus are thought to be unharmed by glyphosate. However, many animals engage in mutualistic interactions with symbiotic microbes that rely on the shikimate pathway to produce amino acids required by these animals. “An impact of glyphosate on animals via their essential bacterial partners that use or even specialize in the shikimate metabolic pathway seems obvious, once the interaction of both partners is understood,” explains Tobias Engl, one of the lead authors of the study. Glyphosate has already been shown to negatively affect microorganisms in the gut of honeybees, making the bees more susceptible to various stress factors. Furthermore, mutualistic bacteria across several herbivorous insect taxa provide a core benefit: the aromatic amino acid tyrosine needed for the biosynthesis of the insect exoskeleton (cuticle). This dependence on the symbiosis, in turn, may render insect herbivores particularly vulnerable to glyphosate in agriculture: The herbicide inhibits the shikimate pathway in their symbiotic bacteria and, as a result, important amino acids needed for cuticle formation are missing.

Is dependence on their symbiotic partners the Achilles heel of insects?

In the current study, the scientists show that glyphosate negatively influences the mutualistic bacteria harbored by the saw-toothed grain beetle Oryzaephilus surinamensis, an economically important pest of stored grain products. Exposure to the herbicide completely abolished the mutualistic benefit that symbiotic bacteria provide for the formation of the cuticle, an insect’s primary protection against stresses, such as drought or predator attack.

The researchers sequenced the genome of the symbiont associated with O. surinamensis. The tiny symbiont genome (300 kbp) contains the genetic instruction for a metabolism specialized on the synthesis of aromatic amino acids via the shikimate pathway. Interestingly, the genome strongly resembles that of the bacterial partners of the palm weevil, which are also involved in cuticle formation, although these symbionts belong to a different group of bacteria.

“Finding a functionally equivalent symbiotic relationship that arose independently in two different bacteria phyla and distantly related beetle families highlights the importance of cuticle-supporting symbioses in beetles,” says Julian Kiefer, the study’s first author. The scientists tested the functional benefits for the host experimentally by supplementing the beetles’ diet with aromatic amino acids, thus compensating for the elimination of their symbionts. Conversely, glyphosate exposure inhibited the establishment of the symbiotic bacteria throughout the beetle’s development and abolished completely the mutualistic benefit for cuticle synthesis.

“When we observed the detrimental impact of glyphosate exposure on this symbiotic association, we wondered whether glyphosate poses a general threat to insects that depend on their microbial partners,” explains Engl. By using phylogenetic analyses, the authors demonstrate that many obligate mutualistic bacteria associated with various different insect hosts indeed encode a glyphosate-sensitive enzyme in the shikimate pathway, suggesting that the susceptibility of its microbial symbionts to glyphosate represents an Achilles heel for an insect.

We are currently experiencing insect decline on a massive scale. Insect abundance is decreasing, as is insect diversity, not to mention the impact of the disappearance of bees, beetles and other insects at higher levels in the food chain. The new findings highlight the fact that the use of the herbicide glyphosate in agriculture endangers vital symbiotic relationships between insects and microorganisms and thus poses a serious threat to our ecosystems.