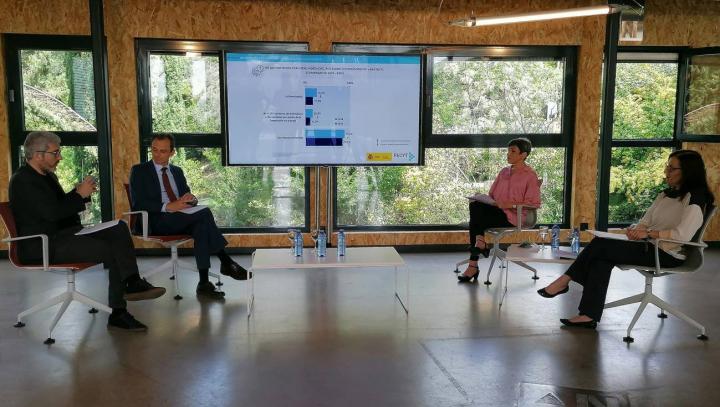 The presentation was attended by Pedro Duque, Minister of Science and Innovation, Josep Lobera, Professor of Sociology at the Autonomous University of Madrid (UAM) and scientific co-director of the Survey and the subsequent study, and Rosa Capeáns, Director of the Scientific Culture and Innovation Department of FECYT. Pampa García, Editor-in-Chief of the SINC Agency, moderated a debate in which the results were presented in six blocks: Interest in scientific and technological issues; Image of scientific and technological research in Spain; Science and technology: media; Use of therapies without scientific evidence; Robotisation and artificial intelligence; and Climate change.

Among the survey results, a large majority of the Spanish population believe that more should be invested in science and technology at all levels of public administration and private companies. This demand is higher in relation to the Spanish government, supported by 85 % of the population. Eighty percent believe that regional governments should increase investment in science and technology research, along with 71% who believe that local administrations and private companies should do so.

A spontaneously declared interest in science and technology continues to be higher among men (19 %) than among women (10 %). However, women show a greater interest in topics with a very direct relationship to science and technology, such as medicine and health. Thirty-two percent of women show a spontaneous interest in these issues, compared to 20 % among men. Women were also more interested in issues related to the pandemic (50 %, compared to 43 % of men), a central theme this year and closely linked to the development of scientific evidence.

Use of therapies without scientific evidence

The survey includes a specific module dedicated to researching the social perception of some aspects of science applied to health. In a previous press release in February, the results concerning attitudes towards vaccination were explained.

On the other hand, one in six Spaniards (17 %) say they trust the beneficial effects of homeopathy, eight percentage points less than two years ago, while 11 % trust reiki (the laying on of hands), five percentage points less than two years ago. This decline seems to be linked to information campaigns on these treatments but also to a general decrease in confidence, which extends to conventional treatments such as vaccination.

The survey has shown in recent editions that the Internet has established itself as a fundamental means of scientific information and communication in Spain. In this edition, 61 % of the population say that they get information about science and technology on the Internet, mainly through social networks and through the digital versions of the general media.

For the 10th Social Perception of Science and Technology Survey, 7,953 interviews have been carried out, distributed in each Autonomous Community in Spain. The population studied are people aged 15 and over who have been residents in Spain for 5 years or more.

The information collection work took place from 14 July to 19 October 2020 (no fieldwork was carried out in the month of August). The sampling error for the sample as a whole is ±1.12 percentage points for a 95 % confidence level.