LAWRENCE — Two sister species of near-primate, called “primatomorphans,” dating back about 52 million years have been identified by researchers at the University of Kansas as the oldest to have dwelled north of the Arctic Circle. The findings appear today in the peer-reviewed journal PLOS ONE. 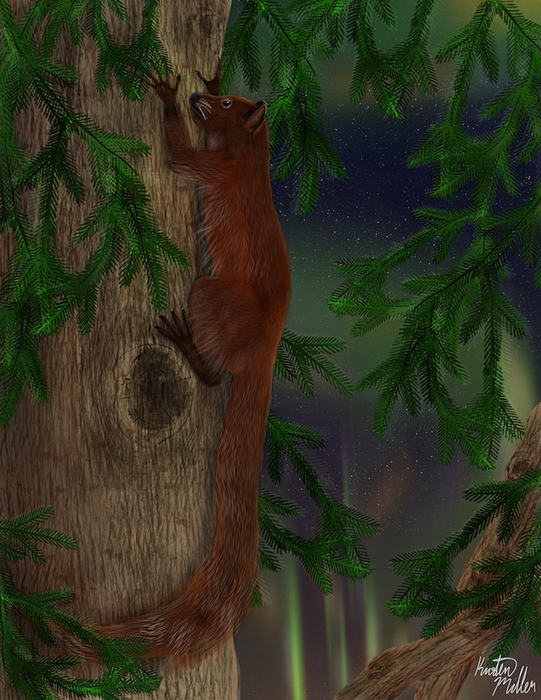 LAWRENCE — Two sister species of near-primate, called “primatomorphans,” dating back about 52 million years have been identified by researchers at the University of Kansas as the oldest to have dwelled north of the Arctic Circle. The findings appear today in the peer-reviewed journal PLOS ONE.

According to lead author Kristen Miller, doctoral student with KU’s Biodiversity Institute and Natural History Museum, both species — Ignacius mckennai and I. dawsonae — descended from a common northbound ancestor who possessed a spirit “to boldly go where no primate has gone before.”

The specimens were discovered on Ellesmere Island, Nunavut, Canada, in layers of sediment linked with the early Eocene, an epoch of warmer temperatures that could foretell how ecosystems will fare in coming years due to human-driven climate change.

“No primate relative has ever been found at such extreme latitudes,” Miller said. “They’re more usually found around the equator in tropical regions. I was able to do a phylogenetic analysis, which helped me understand how the fossils from Ellesmere Island are related to species found in midlatitudes of North America — places like New Mexico, Colorado, Wyoming and Montana. Even down in Texas we have some fossils that belong to this family as well.”

The Arctic Circle was much warmer when these close evolutionary cousins of primates lived — a boreal ecosystem that hosted a plethora of early Cenozoic vertebrates, including ancient crocodiles — but like today was still mostly dark for half of the year. This darkness, according to Miller, may have triggered both species to evolve more robust teeth and jaws compared with other primate relatives of the time.

“A lot of what we do in paleontology is look at teeth — they preserve the best,” said Miller, who analyzed high-resolution microtomography of the fossil teeth described in the paper. “Their teeth are just super weird compared to their closest relatives. So, what I’ve been doing the past couple of years is trying to understand what they were eating, and if they were eating different materials than their middle-latitude counterparts.”

Miller and her co-authors believe food was much tougher to find during dim winter months when the Artic primate relatives likely were forced to consume harder material.

“That, we think, is probably the biggest physical challenge of the ancient environment for these animals,” said corresponding author Chris Beard, senior curator of vertebrate paleontology at the Biodiversity Institute and Foundation Distinguished Professor of Ecology & Evolutionary biology at KU. “How do you make it through six months of winter darkness, even if it’s reasonably warm? The teeth and even the jaw muscles of these animals changed compared to their close relatives from midlatitudes. To survive those long Arctic winters, when preferred foods like fruits were not available, they had to rely on ‘fallback foods’ like nuts and seeds.”

Miller and Beard’s other co-author is Kristen Tietjen, a scientific illustrator at the Biodiversity Institute.

Additionally, the researchers found both species were slightly larger than their closest relatives farther to the south — a group of primate cousins dubbed “plesiadapiforms.”

“But they’re still pretty small,” Miller said. “Some plesiadapiforms from the midlatitudes of North America are really, really tiny. Of course, none of these species are related to squirrels, but I think that’s the closest critter that we have that helps us visualize what they might have been like. They were most likely very arboreal — so, living in the trees most of the time.”

The researchers think adaptations displayed by both Arctic species during a time of global warming show how some animals likely could evolve new traits in response to climate change driven by human activity today.

“It does show how something like a primate or a primate relative that’s specialized to one environment can change based off of climate change,” Miller said. “I think probably what it says is primates’ range could expand with climate change or move at least towards the poles rather than the equator. Life starts to get too hot there, perhaps we’ll have a lot of taxa moving north and south, rather than the intense biodiversity we see at the equator today.”

Because both fossil species are new to science, the investigators bestowed them with scientific names honoring a pair of paleontologists who worked on Ellesmere Island decades ago. One of these namesake paleontologists was a KU alumna and pioneer for women in the field of paleontology.

“Mary Dawson was an amazing person,” Beard said. “She earned her doctorate at KU back in the ’50s and was among the first, if not the first, American women to get a Ph.D. in paleontology — and one of the first women to make a name for herself as a paleontologist in the United States. I worked closely with Mary for more than 20 years in my former career at the Carnegie Museum, where she spent her whole career. Mary was the leader of a big project on Ellesmere Island. Of course, we were going to name one of the species after her. The other species is named after Malcolm McKenna, a contemporary, close friend and colleague of Mary Dawson and a former mentor of mine.”

Indeed, the fossil species Ignacius mckennai and I. dawsonae were part of a collection of fossils left behind by Dawson and McKenna for further analysis.

“Mary and Malcolm bequeathed me with those fossils and asked me to study them,” Beard said. “I said, ‘Yes, of course — I’m happy to do that.’ They just sat like a fine wine and got better and better through time until Kristen showed up — and it was clear that Kristen had everything that it took to carry the ball over the finish line.”