A new study from North Carolina State University shows a reproducible way of studying cellular communication among varied types of plant cells by “bioprinting” these cells via a 3D printer.   Learning more about how plant cells communicate with each other – and with their environment – is key to understanding more about plant cell functions and could ultimately lead to creating better crop varieties and optimal growing environments. 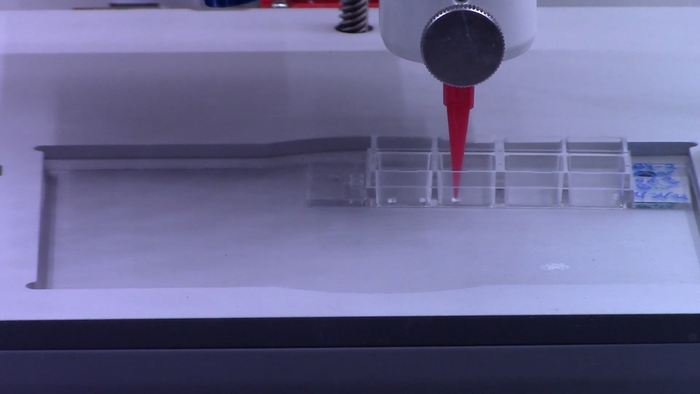 A new study from North Carolina State University shows a reproducible way of studying cellular communication among varied types of plant cells by “bioprinting” these cells via a 3D printer.   Learning more about how plant cells communicate with each other – and with their environment – is key to understanding more about plant cell functions and could ultimately lead to creating better crop varieties and optimal growing environments.

The researchers bioprinted cells from the model plant Arabidopsis thaliana and from soybeans to study not just whether plant cells would live after being bioprinted – and for how long – but also to examine how they acquire and change their identity and function.

“A plant root has a lot of different cell types with specialized functions,” said Lisa Van den Broeck, an NC State postdoctoral researcher who is the first author of a paper describing the work. “There are also different sets of genes being expressed; some are cell-specific. We wanted to know what happens after you bioprint live cells and place them into an environment that you design: Are they alive and doing what they should be doing?”

The process of 3D bioprinting plant cells is mechanically similar to printing ink or plastics, with a few necessary tweaks.

“Instead of 3D printing ink or plastic, we use ‘bioink,’ or living plant cells,” Van den Broeck said. “The mechanics are the same in both processes with a few notable differences for plant cells: an ultraviolet filter used to keep the environment sterile and multiple print heads – rather than just one – to print different bioinks simultaneously.”

Live plant cells without cell walls, or protoplasts, were bioprinted along with nutrients, growth hormones and a thickening agent called agarose – a seaweed-based compound. Agarose helps provide cells strength and scaffolding, similar to mortar that supports bricks in the wall of a building.

“We found that it is critical to use proper scaffolding,” said Ross Sozzani, professor of plant and microbial biology at NC State and a co-corresponding author of the paper. “When you print the bioink, you need it to be liquid, but when it comes out, it needs to be solid. Mimicking the natural environment helps keep cellular signals and cues occurring as they would in soil.”

The research showed that more than half of the 3D bioprinted cells were viable and divided over time to form microcalli, or small colonies of cells.

“We expected good viability on the day the cells were bioprinted, but we had never maintained cells past a few hours after bioprinting, so we had no idea what would happen days later,” Van den Broeck said. “Similar viability ranges are shown after manually pipetting cells, so the 3D printing process doesn’t seem to do anything harmful to cells.”

“This is a manually difficult process, and 3D bioprinting controls the pressure of the droplets and the speed at which the droplets are printed,” Sozzani said. “Bioprinting provides better opportunity for high throughput processing and control over the architecture of the cells after bioprinting, such as layers or honeycomb shapes.”

The researchers also bioprinted individual cells to test whether they could regenerate, or divide and multiply. The findings showed that Arabidopsis root and shoot cells needed different combinations of nutrients and scaffolding for optimal viability.

“This shows that 3D bioprinting can be useful to study cellular regeneration in crop plants,” Sozzani said.

Finally, the researchers studied the cellular identity of the bioprinted cells. Arabidopsis root cells and embryonic soybean cells are known for high proliferation rates and a lack of fixed identities. In other words, like animal or human stem cells, these cells can become different cell types.

“We found that bioprinted cells can take on the identity of stem cells; they divide and grow and express specific genes,” Van den Broeck said. “When you bioprint, you print a whole population of cell types. We were able to examine the genes expressed by individual cells after 3D bioprinting to understand any changes in cell identity.”

The researchers plan to continue their work studying cellular communication after 3D bioprinting, including at the single-cell level.

“All told, this study shows the powerful potential of using 3D bioprinting to identify the optimal compounds needed to support plant cell viability and communication in a controlled environment,” Sozzani said.

The research appears in Science Advances and was supported by National Science Foundation EAGER grant MCB #203928 and by BASF Plant Sciences. Tim Horn, assistant professor of mechanical and aerospace engineering at NC State, is a co-corresponding author of the paper.

Abstract: Capturing cell-to-cell signals in a three-dimensional (3D) environment is key to studying cellular functions. A major challenge in current culturing methods is the lack of accurately capturing multicellular 3D environments. In this study, we established a framework for 3D bioprinting plant cells to study cell viability, cell division, and cell identity. We established long-term cell viability for bioprinted Arabidopsis and soybean cells. To analyze the generated large image datasets, we developed a high-throughput image analysis pipeline. Furthermore, we showed the cell cycle reentry of bioprinted cells for which the timing coincides with the induction of core cell cycle genes and regeneration-related genes, ultimately leading to microcallus formation. Last, the identity of bioprinted Arabidopsis root cells expressing endodermal markers was maintained for longer periods. The framework established here paves the way for a general use of 3D bioprinting for studying cellular reprogramming and cell cycle reentry toward tissue regeneration.

R.S. and T.H. disclose a submitted patent application (PCT/US2021/023398). All other authors declare no competing interest.