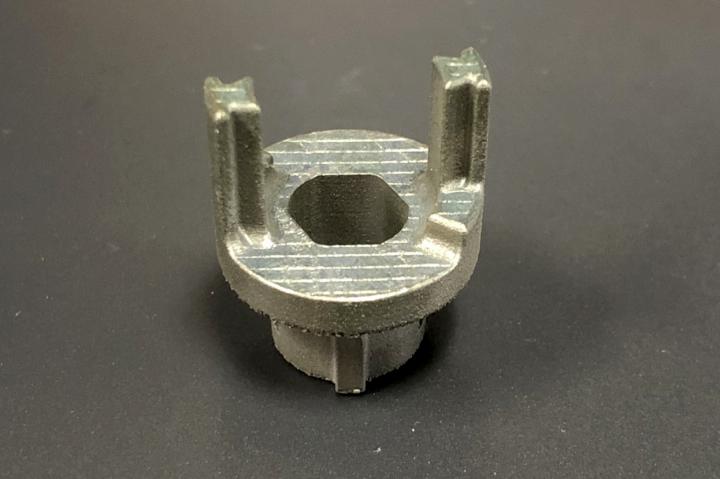 When the Zucker Institute for Applied Neurosciences at the Medical University of South Carolina needed to bring to life a neurosurgeon’s idea for better instrumentation for sacroiliac surgery, there was one obvious partner to turn to: the MUSC College of Dental Medicine.

The college is the only dental program in the nation to have the Sisma Mysint100 3D selective laser fusion printer that creates 3D prints from metal rather than plastic, and Walter Renne, D.M.D., a professor in the Department of Oral Rehabilitation and assistant dean of innovation and digital dentistry, is eager to see what it can do.

“3D printing is how we get stuff from our imagination into reality. One of the issues in the past was most of what we could print was plastic, and plastic degrades. You need something to actually function,” he said. “Now, instead of imagining something and developing a plastic prototype that I can look at, I can imagine something and develop a real, usable final product that can be put into a drill or placed in a patient’s mouth. It’s really exciting to have that at the university.”

The manufacturer, Sisma, donated the printer about six months ago. Renne said Sisma wanted its latest device to find a home in a college that would think up creative and innovative uses for it. Those uses aren’t limited to dentistry, however.

The college and ZIAN have collaborated in the past, so it was natural for ZIAN to turn to Renne and colleagues for help with this project, which started with an idea from Stephen Kalhorn, M.D., a professor in the Department of Neurosurgery.

Kalhorn has worked several times before with ZIAN, a technology accelerator that exists to help MUSC’s medical providers to develop their ideas for new devices or device improvements.

“I run things by them because then I can spend the majority of my time in the operating room actively helping patients,” he said. “I can literally drop off a napkin sketch at a ZIAN engineer’s desk or even less than that. There’s even been times that I’ve just drawn on the dry-erase board in the OR and taken a picture and sent it to them, and they’re off to the races.”

Bony fusion requires three elements, Kalhorn explained: stabilization, such as when a cast is placed on a broken limb; decortication, which is the removal of the top layer of tissue to ensure there’s no cartilage or fibrous material blocking the bone cells from building a bridge between the two bones; and compression, whereby the pressure encourages more bone growth. But nothing on the market takes care of all three elements, he said.

“The impetus behind this idea was it accomplishes all three goals of bony fusion in one device and simplifies the whole process,” he said.

From Kalhorn’s idea, ZIAN drafted plans, and the College of Dental Medicine used the 3D metal printer to create a key prototype component for the fusion system. Mark Semler, chief executive and technology officer for ZIAN, said having this printer on campus makes a huge difference in moving projects along. What used to take weeks or months to fabricate at great expense due to the advanced materials involved can now be made in hours, he said.

The MUSC Foundation for Research Development filed an international PCT patent application for the device in August.

Kalhorn noted that his dental colleagues are “light years ahead of us” when it comes to implants and using technology like 3D printing.

“I hope this is a better bridge to work together more because they really understand implants and bone really well. There are tricks they have that we can incorporate in the area we work on – the spine and SI joint,” he said.

Renne said the dental college is just getting started with the possibilities offered by this printer. So far, aside from dental devices and appliances, they’ve worked with bioengineering on the properties of printed metals, printed prototype hip replacements and, of course, Kalhorn’s device.

“I think it was the perfect partnership to help ZIAN print the intricate part they needed for their latest patent,” he said.

Founded in 1824 in Charleston, MUSC is the oldest medical school in the South as well as the state’s only integrated academic health sciences center with a unique charge to serve the state through education, research and patient care. Each year, MUSC educates and trains more than 3,000 students and nearly 800 residents in six colleges: Dental Medicine, Graduate Studies, Health Professions, Medicine, Nursing and Pharmacy. The state’s leader in obtaining biomedical research funds, in fiscal year 2019, MUSC set a new high, bringing in more than $284 million. For information on academic programs, visit musc.edu.