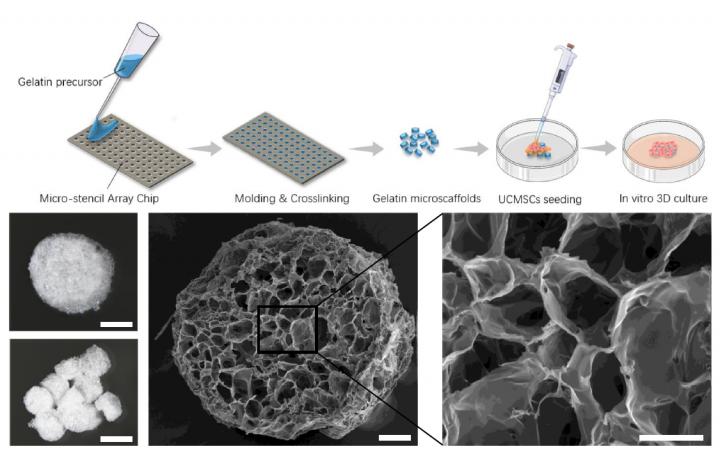 A 3D biomaterial scaffold design to slowly release stem cells has worked to ensure implanted stem cells stick around to relieve pain and reverse arthritis in mice knee joints. This reduces the use of stem cells by 90 percent, thus avoiding the challenge of redness, swelling and scar tissue that can arise from large doses of such stem cells, and potentially opening a path to reversal of osteoarthritis in humans for the first time.

The results were published in Chemical Engineering Journal on February 25.

There is currently no treatment that can reverse the course of osteoarthritis, and our sole options are to try to relieve pain. Stem cell therapy potentially offers hope and has been shown to alienate the disease, but a ‘goldilocks’ dose of stem cells remains out of reach. Too much of a dose of stem cells and the subject suffers redness, swelling and scar tissue. Too little and the therapy is only successful for a limited period due to gradual cell loss.

To overcome this dosage problem, researchers with the Department of Orthopedics at the Union Hospital of Huazhong University of Science and Technology seeded umbilical cord mesenchymal stem cells on a ‘cryogel’ biomaterial.

Mesenchymal stem cells (MSCs) are adult stem cells that can differentiate themselves into other types of cells. MSCs are sourced from bone marrow, fat, or umbilical cord tissue. Umbilical cord-derived MSCs (UCMSCs) have emerged in recent years as popular therapeutic transplant cells because of their abundant supply, high proliferative capacity, and non-invasive harvesting procedure, and because they pose relatively minor ethical issues.

Cryogels are gel matrices that are formed at subzero temperatures. They have interconnected macropores (pores larger than 10 micrometers in diameter), much like a sponge. And, because like a sponge, these holes can allow mass transport of small particles in them, cryogel biomaterials potentially have a range of biomedical uses.

Upon seeding of the stem cells on the cryogel biomaterial, the researchers found that the cells became stronger and showed enhanced therapeutic effects with regard to osteoarthritis in mice. The cryogel also, crucially, ensured the implanted stem cells stayed in the knee joint area for a much longer time. This in turn allowed a reduction of the dosage of stem cells by 90 percent.

“It takes about two weeks for half of the implanted cells to leave, but their regenerative effects stick around for longer,” said corresponding author Wei Tong from the Department of Orthopedics of Union Hospital. “So it is possible that the therapeutic result comes indirectly, via the stem cells secreting epidermal growth factors, which stimulate cell proliferation and healing, rather than directly becoming newly formed cartilage in the joint.”

The researchers also found that the cells were very powerful in reducing joint pain in the mice resulting from inflammation.

Following this proof of concept in mice, the researchers now want to test it out on non-human primates, and then ultimately use the stemcell-cryogel complex in clinical trials in humans with the hope of developing a new treatment for osteoarthritis that works to reverse the disease.

The Orthopaedic Department of Wuhan Union Hospital Affiliated with Huazhong University of Science and Technology was founded in the 1950s, and started to admit candidates for its Doctor of Philosophy and Doctor of Medicine programs since the 1980s. In 2016, Wuhan Union 3D Digital Orthopaedic Research and Development Centre was established, and the English journal Biomaterials Translational, co-published by the Orthopaedic Department was launched in 2018. At present, the Union Hospital has over 600 beds and 8 unites including joint, spine, oncology, trauma, and so on. In addition, the hospital also has five international cooperative diagnosis and therapy centers. In the past three years, the Orthopaedic Department has received more than 100 grants with over 50 million CNY, including grants for two national key R & D projects.