A 25-million-year-old eagle fossil found in South Australia adds to the long evolutionary history of raptors in Australia. 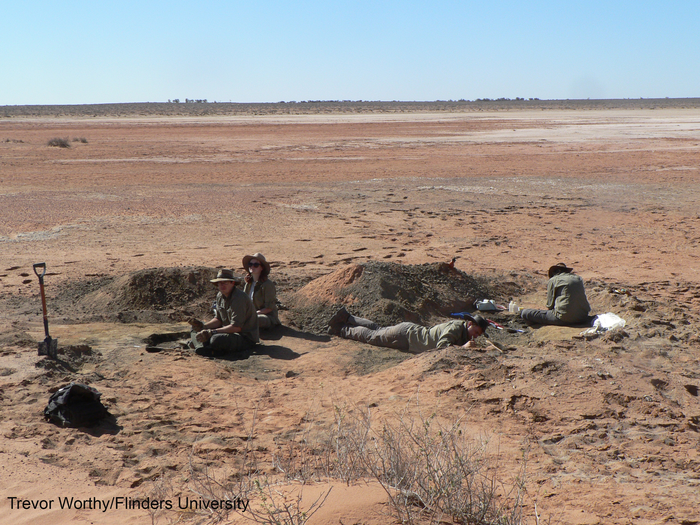 A 25-million-year-old eagle fossil found in South Australia adds to the long evolutionary history of raptors in Australia.

Palaeontologists from Flinders University have unearthed Australia’s oldest eagle fossils on a remote outback cattle station, describing a new fossil species which lived during the late Oligocene. Named Archaehierax sylvestris, this species is one of the oldest eagle-like raptors in the world.

“This species was slightly smaller and leaner than the wedge-tailed eagle, but it’s the largest eagle known from this time period in Australia,” says Flinders University PhD candidate Ellen Mather, first author in the new paper published in the peer-reviewed journal Historical Biology.

“The foot span was nearly 15 cm long, which would have allowed it to grasp large prey. The largest marsupial predators at the time were about the size of a small dog or large cat, so Archaehierax was certainly ruling the roost.”

“With eagles at the top of the food chain, they are always few in number – and so are infrequently preserved as fossils,” says co-author Associate Professor Trevor Worthy.

“It’s rare to find even one bone from a fossil eagle. To have most of the skeleton is pretty exciting, especially considering how old it is.”

The Australian environment during the Oligocene was very different to today.

The remains of Archaehierax were found on the barren shore of a dry lake (known as Lake Pinpa) in a desolate sandy desert habitat during ongoing Flinders University investigations into a lost ecosystem, when Australia’s interior was covered in trees and verdant forests.

However, living in forests provides some challenges for an animal that flies. So how did Archaehierax avoid collisions with trees and branches while it hunted?

“The fossil bones reveal that the wings of Archaehierax (pron. ah-kay-hi-rax) were short for its size, much like species of forest-dwelling eagles today. Its legs, in contrast, were relatively long and would have given it considerable reach,” says Ms Mather.

“The combination of these traits suggest Archaehierax was an agile but not particularly fast flier and was most likely an ambush hunter. It was one of the top terrestrial predators of the late Oligocene, swooping upon birds and mammals that lived at the time.”

Archaehierax would have hunted koalas, possums and other animals in trees surrounding a vast shallow lake, on which waterfowl, cormorants and flamingoes were abundant.

Out of all the species known from this site, Archaehierax is one of the best preserved; the partial fossil skeleton is comprised of 63 bones.

“I have studied this system for many years now, and this is the most exquisite fossil we have found to date,” says Associate Professor Trevor Worthy.

“The completeness of the Archaehierax skeleton allowed us to determine where it fits on the eagle family tree. It shows a range of features unlike any seen among modern hawks and eagles,” Ms Mather explains.

“We found that Archaehierax didn’t belong to any of the living genera or families. It seems to have been its own unique branch of the eagle family,” she says.

“It’s unlikely to be a direct ancestor to any species alive today.”

Photo 3: The excavated block containing Archaehierax sylvestris ready to be plaster jacketed for transport back to Flinders University Palaeontology Lab.

Photo 4: A closeup of the Archaehierax sylvestris fossil as it appeared in the field.

Image 5: A comparison of the prepared fossil tarsometatarsus (foot bone) and a hypothesised silhouette of Archaehierax sylvestris (left) compared to the wedge-tailed eagle Aquila audax (right). The scale bar is 10 mm long.

Image 6: Skeleton of an osprey by Eyton (1867) with shaded sections indicating which bones are preserved in the fossil of Archaehierax sylvestris.