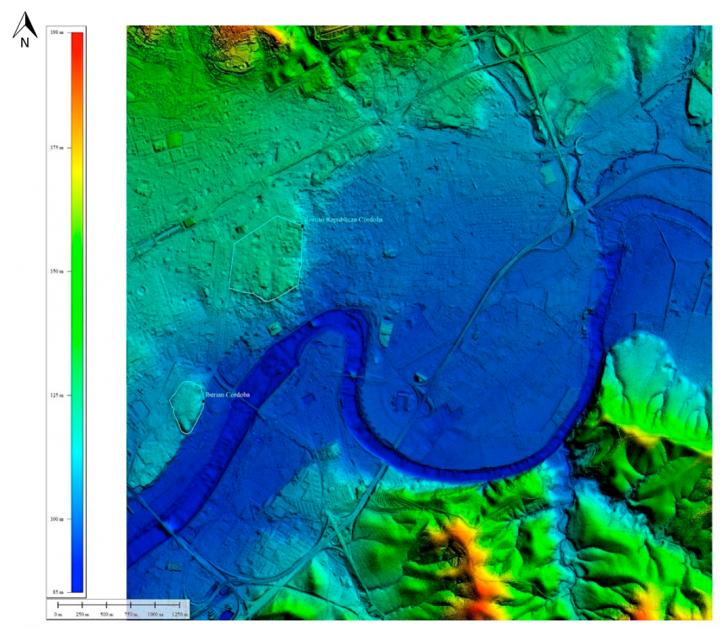 On the land where Cordoba is located in the 21st century, two cities coexisted in the past, each on a hill. An Iberian city was located where Cruz Conde Park lies today, and a Roman city, which was founded at a later time, was located about 500 meters away. Archaeology has had to depend upon geological studies up to now in order to determine how the city developed throughout history, but now, thanks to LiDAR technology, 3D images have been obtained that show what the land was like where Cordoba lies before humans arrived.

Antonio Monterroso, an Art History, Archaeology and Music Department researcher at the University of Cordoba, used data from a specific LiDAR flight for the first time. This flight was performed by the National Geographic Institute (abbreviated to IGN in Spanish) in 2016 and covered all of Spain. The data was used to analyze the morphology of an already built city. These data are publicly accessible and have led to the aerial detection of several archaeological sites outside of urban enclaves in Spain, but this tool’s potential was underestimated when it came to analyzing historical cities.

Aerial laser LiDAR technology is a recent development. A small plane flies over an area and casts millions of points of light and uses them to calculate the height at which objects they collide with are located. These objects could be trees, mountains or buildings. This provides a three-dimensional image of the area being studied.

Cordoba is a built-up city, so these data apparently do not provide any archaeological information, due to the fact that most ruins are buried underneath new buildings. However, if these data are filtered and only the ones that hit the ground are chosen, while disregarding the points that collided with urban features, they can be used to generate a 3D picture of the actual land where the city lies.

In this way, Antonio Monterroso Checa was able to digitally recreate the geomorphology of the area where Cordoba is located before it was covered with buildings. In the images, one can clearly see how first the Iberian city and later the Roman one both took advantage of the shape of the land in order to build their settlements. The former was located on a hill, which is named Los Quemados Hill today, while the latter was built on a less steep hill farther to the northeast. The images also show how these two settlements were located next to the old Guadalquivir riverbed, which was farther north than it is today. In Roman and medieval times, once the river took its current shape, the city spread over what had once been the old riverbed, and high foundations and fortifications were built to avoid flooding.

Up until now, the traces of this old Guadalquivir riverbed had only been revealed by means of archaeologial studies that detected signs of flooding in the area and the presence of underground sand. Thanks to Monterroso’s research, we can now see this evidence digitally in a clearer and more graphic way.

This is the first part of a much broader scope of research that Antonio Monterroso is performing on the province of Cordoba. He is currently immersed in studying LiDAR data from the IGN around the Medina Azahara historical site and its surroundings. The aim of this work is to continue to uncover new information about the world heritage that the historical city of Cordoba holds.

Reconstructing the diet of fossil vertebrates

Scienmag May 16, 2019
Scientists have designed proteins that move in response to acid, a technology that could help medication enter…

THC found more important for therapeutic effects in cannabis than…

Wound healing in mucous tissues could ward off AIDS