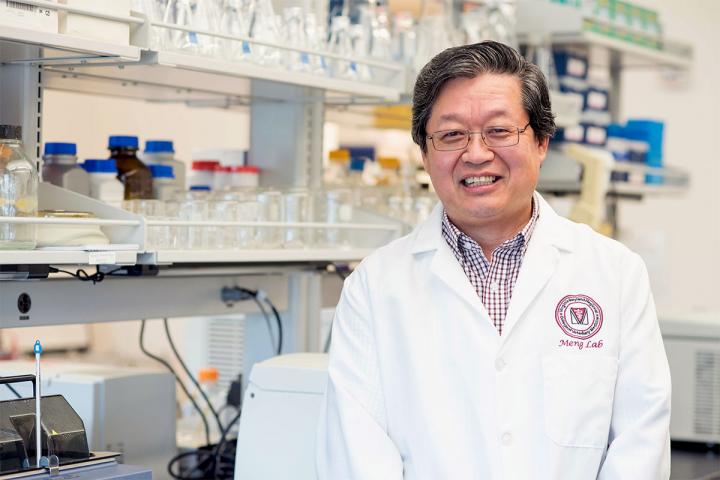 For decades, University Distinguished Professor of Molecular Virology X.J. Meng and his lab at the Virginia-Maryland College of Veterinary Medicine have studied hepatitis E virus (HEV), the causative agent of hepatitis E in humans.

Now, with a new, five-year National Institutes of Health RO1 grant totaling nearly $2 million — Meng’s third successful competing renewal — the molecular virologist and his team in the Department of Biomedical Sciences and Pathobiology are aiming to strengthen their life-altering research on HEV.

“A very impressive achievement is that this RO1 grant has been successfully and continuously acquired four times for funding,” said Ansar Ahmed, a professor of immunology and the veterinary college’s associate dean of research and graduate studies. Although this type of a success is difficult to sustain, the fact remains: Meng’s work for his HEV research program has been funded continuously by the NIH since 2002.

Annually infecting more than 20 million people worldwide — particularly in developing countries — according to the World Health Organization, HEV causes more than 44,000 deaths per year. Describing the virus as a public health pathogen, Meng said that a significant clinical problem has gained attention in recent years: the development of chronic hepatitis E among immunocompromised people, as well as the high mortality rate, reaching up to 25 percent, among infected pregnant women.

“Scientists just don’t understand why,” Meng said of his forthcoming research. “Why would the virus infect pregnant women and apparently cause such a high mortality? What are the factors in the host and virus contributing to fulminant hepatitis during pregnancy? Not only does the infected pregnant woman die, but the fetus also dies. This predicament has remained elusive for many years.”

In his research, Meng has contributed to the discovery of two novel hepatitis E viruses, including a 1997 finding and identification of the first animal strain of HEV from a pig, a revelation he describes as “serendipitous.” Before arriving at the veterinary college, he was working at NIH and wasn’t studying the virus at all.

“At the time, I was working on the hepatitis C virus, and then a swine pathologist friend called me and said, ‘X.J., I saw that some of the pigs had hepatitis lesions. Mind taking a look at what caused it?’ We ended up discovering the swine HEV from the pig. Ever since that discovery, I realized I have to work on this new virus since I am trained both in human medicine and in veterinary sciences.”

Meng’s discovery of swine HEV brought a paradigm shift in recognizing the virus as a zoonotic virus that can cross species barrier and infect humans. As many discoveries go, Meng said, the recognition of the new virus took a while to accept.

“I remember we tried to publish that first paper initially in this one journal, and it was rejected,” Meng said. “They probably thought we were crazy since HEV was not known to be prevalent in the United States in humans, let alone pigs.” Since the paper’s publication in a different journal, the work has been cited more than a thousand times.

After Meng joined Virginia Tech in 1999, his lab discovered the avian HEV in chickens with hepatitis-splenomegaly syndrome. Meanwhile, since his initial discovery of swine HEV from pigs, more than a dozen other animals have now been identified as reservoirs for the virus, intensifying public health concerns with the potential for foodborne and zoonotic infections.

In 2007, Meng’s team researched pig livers sold in U.S. grocery stores and discovered that 11 percent of the livers not only had HEV contamination, but also could infect humans if served undercooked. Since then, in hopes of designing more effective strategies for fighting cross-species HEV infection, Meng has sought to better understand the virus’ genetic elements and host factors that allow the virus to transfer from animals to people.

“Dr. Meng continues to bring national and international recognition to our college for his groundbreaking research in zoonotic viral diseases,” said Gregory B. Daniel, the veterinary college’s interim dean. “As a physician working with animal diseases for the betterment of both, he epitomizes the One Health concept in both his training and his research.”

Together with his team of co-investigators, including Ahmed, Associate Professor of Theriogenology Sherri Clark-Deener, and Clinical Professor of Anatomic Pathology Tanya LeRoith, along with two new postdoctoral associates and a graduate student, Meng will next examine the underlying mechanism of high mortality among pregnant women caused by HEV, for which there is not yet a widely available vaccine. The team aims to gain information from the project in order to devise effective strategies for the prevention and treatment of HEV-associated fulminant hepatitis failure during pregnancy.

Following the hypothesis that some of the elevated sex hormones may regulate and promote virus replication, leading to more liver damage and thus high mortality, Meng’s team will attempt to locate some of the virus mutation in the virus genome, as well as identify potential hormonal factors contributing to the high mortality among pregnant women.

Although Meng said that his team has a long way to go with its HEV research, he described the challenge as a factor that attracts him to “solving some of the problems that cannot be solved yet.”

Such tenacity carries much weight among his fellow researchers. “We are fortunate to have Dr. Meng as a leader in infectious disease research,” said Margie D. Lee, head of the Department of Biomedical Sciences and Pathobiology. “Not only is he a superior researcher, he is a modest and giving individual and a great mentor for our junior faculty.”

“A lot of scientific discoveries are not planned,” Meng said, reiterating a lesson he emphasizes to his mentees. “It’s an ‘Ah! Something’s not right’ moment. You see something’s not correct, not what you expect, you ask the question ‘Why?’ and you may have found something very interesting, something completely new.”