In adults, hypophosphatasia causes recurrent fractures and chronic pain. In the child population this disease can be much more serious and can even cause premature death, neurological disorders, and respiratory problems. 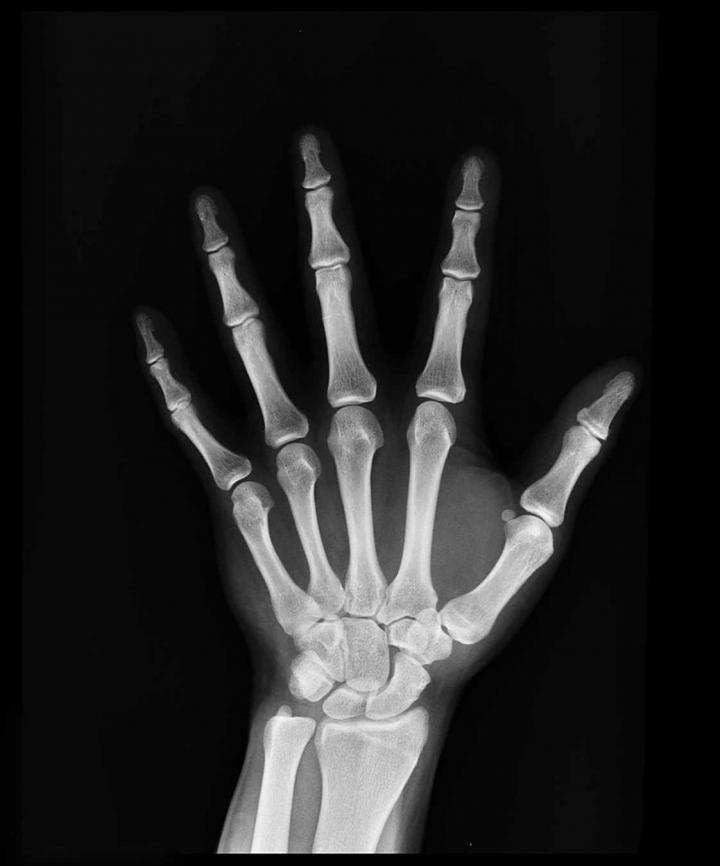 Hypophosphatasia (HPP) is a rare and serious hereditary disease that is potentially life-threatening and is caused by one or more mutations in the gene coding for alkaline phosphatase (ALPL). It is frequently misdiagnosed.

To progress toward its correct clinical evaluation, researchers from the Centre for Biomedical Research in Fragility and Healthy Ageing (CIBERFES) of the research group led by UGR researcher Dr Manuel Muñoz Torres in Granada’s Biohealth Research Institute of Granada (San Cecilio University Hospital) have implemented a protocol to assess the real proportion of patients affected by this disease. They have also validated the phenotype associated with the two new mutations identified, by means of bioinformatics studies and in vitro assays at the cellular level.

They concluded that almost half of the patients in the study had not been correctly diagnosed and that, extrapolating the data to the Spanish population, there could be as many as 15,000 cases potentially undetected.

Researchers Cristina and Beatriz García Fontana explain that this study, published in Scientific Reports, “provides evidence that it is essential to perform a correct clinical assessment to make a correct diagnosis of this disorder and provide suitable treatment to those patients affected”. Due to its low prevalence, this metabolic disorder is usually misdiagnosed and is often confused with more common bone disorders such as osteoporosis, leading to erroneous treatments that could actually worsen the prognosis.

Scientists in the CIBERFES research group estimate that the prevalence in Spain could be twice that quantified in previous studies. To perform this extrapolation, an evaluation of serum levels of total alkaline phosphatase was carried out on a sample of 78,590 patients (76,083 adults and 2,507 children) over the course of 2016. Among the adult population, 1,907 people were identified as having ALP levels below the reference range. After studying the clinical histories of each patient, those subjects who did not meet the criteria established in the proposed protocol were eliminated from the study. Finally, out of the 56 individuals selected, 16 adults (81% of whom were women) agreed to participate. Most of these individuals presented no symptoms at all, or they presented mild symptoms but had never been diagnosed with this condition.

“Using the protocol described in our study, we discovered that 7 of these 16 patients were affected by hypophosphatasia, which indicates that almost half of the population we studied was not correctly diagnosed in normal clinical practice,” observes Dr. García Fontana of CIBERFES. Extrapolating these data to the Spanish population, there could be 4,000 potential cases of hypophosphatasia currently undiagnosed–and there could be many more.

“Taking into account the proportion of patients who did not participate in the study for different reasons (71%), and according to our results, the current estimate of possible cases of HHP undetected in Spain could be as high as 15,000,” continues Dr. García Fontana. This implies that the estimated prevalence of mild HPP in Spain would be twice that previously published for Europe (1/3,100 vs. 1/6,370).

Of the patients analysed at the hospital, none presented a family history of HPP or rickets in childhood, but 8 patients (7 of them women) did suffer from prevalent fractures, six of them suffered from symptomatic chondrocalcinosis, and 5 presented dental anomalies. Regarding the biochemical evidence, 10 adults presented lower alkaline phosphatase and higher levels of the PLP substrate compared to the reference values. Of these ten, 7 presented mutations of the ALPL gene, two of which had not previously been described.

Hypophosphatasia in adults involves a loss of mineralization, which gives rise to recurrent fractures, femoral fractures, a history of rickets, and musculoskeletal pain, plus certain dental conditions. Among children it is much more serious, and can cause brain damage, respiratory problems, and even premature death in babies.

Link to the reference article:

“Epidemiological, Clinical and Genetic Study of Hypophosphatasia in a Spanish Population: Identification of Two Novel Mutations in The Alpl Gene”

The Centre for Biomedical Research (CIBER) is a consortium under the Instituto de Salud Carlos III (Spanish Ministry of Science, Innovation and Universities) and is co-financed by FEDER. The CIBER relating to Fragility and Healthy Ageing (CIBERFES) was created in late 2016 to better understand, assess, and mitigate, as far as possible, fragility and its main consequence–disability–which affects many older people. The 20 research groups that form the consortium, from 18 institutions, work on four major strands of research: the biological mechanisms of healthy aging and those that lead to frailty and disability; the use of cohorts to study the interaction between chronic disease, aging, and functional impairment; preventive and therapeutic interventions in fragility and functional impairment; and care models.

Scienmag Oct 1, 2019
Interventions based on games that require the use of technology have proved to facilitate motivation and learning…