An analysis of ancient DNA from a 100,000-year-old polar bear has revealed that extensive hybridization between polar bears and brown bears occurred during the last warm interglacial period in the Pleistocene, leaving a surprising amount of polar bear ancestry in the genomes of all living brown bears. 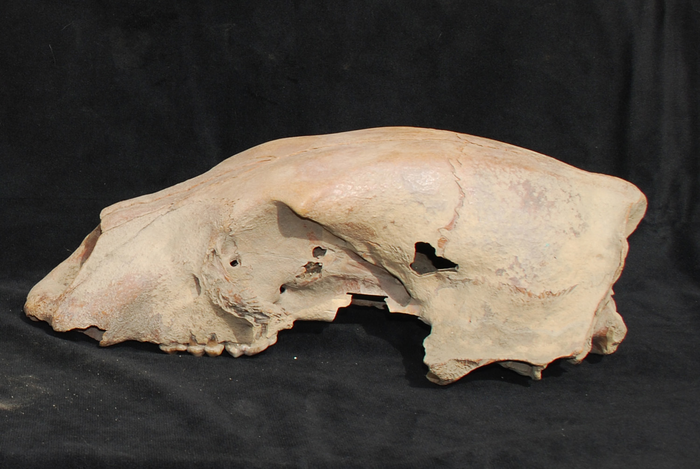 An analysis of ancient DNA from a 100,000-year-old polar bear has revealed that extensive hybridization between polar bears and brown bears occurred during the last warm interglacial period in the Pleistocene, leaving a surprising amount of polar bear ancestry in the genomes of all living brown bears.

The study, led by scientists at the University of California, Santa Cruz, was published June 16 in Nature Ecology & Evolution. The researchers obtained ancient DNA from the skull of a juvenile polar bear that was found in 2009 on the coast of the Beaufort Sea in Arctic Alaska. Scientists nicknamed the bear ‘Bruno,’ although DNA analysis later showed it to be a female.

“The availability of Bruno’s paleogenome has made it possible to detect an ancient admixture event that impacted all living brown bears,” said first author Ming-Shan Wang, a postdoctoral scientist in the UCSC Paleogenomics Lab.

Corresponding author Beth Shapiro, professor of ecology and evolutionary biology at UC Santa Cruz and an investigator at the Howard Hughes Medical Institute, said the team’s genomic analyses show that Bruno belonged to a polar bear population that was ancestral to living polar bears. At some point, probably after around 125,000 years ago, she said, the polar bear lineage leading to Bruno and the brown bear lineage leading to all living brown bears crossed paths and hybridized.

As a result of this ancient admixture, polar bear ancestry accounts for as much as 10% of the genomes of brown bears living today. “We never would have seen this without Bruno’s genome, because all living brown bears have that admixture as part of their genomes,” Shapiro said.

Although polar bears and brown bears are distinct species with striking differences in appearance, behavior, and habitats, they are closely related and can readily hybridize when their ranges overlap. Reports of hybrids have increased in recent years as the climate warms and disappearing sea ice forces polar bears onto Arctic coastal areas, while brown bears expand their range northward.

Previous studies of ancient DNA have shown that admixture has occurred in certain populations of brown bears at least four different times between around 15,000 and 25,000 years ago. In all cases, the direction of gene flow was from polar bears into brown bears.

“The admixed individuals, if they survive, do so as brown bears, perhaps because they have difficulty hunting successfully on the sea ice if they are not completely white,” Shapiro explained. “Polar bears have always been a small population with not much genetic diversity.”

The new study did find some evidence of possible gene flow from brown bears into Bruno’s lineage, but the absence of admixture in polar bears today supports the idea that brown bear ancestry reduces a bear’s fitness for life as a polar bear. After diverging from brown bears about 500,000 years ago, polar bears evolved into highly specialized hunters of marine mammals on the Arctic sea ice. Brown bears, in contrast, are generalists ranging widely across North America, Europe, and Asia.

Bruno lived during a time of changing climate after the peak of a warm interglacial period when temperatures and sea levels were considerably higher than they are now. Similar conditions can be expected in the future as a result of rapid climate change driven by the burning of fossil fuels and other human activities. As Arctic sea ice declines, many polar bear populations are already struggling to survive.

“If the rapid, unnatural, and severe human-caused warming of the Arctic we are documenting today continues unabated, it is uncertain whether polar bears will have a sea ice habitat to return to and survive genetically,” said coauthor Ian Stirling, a polar bear biologist and research scientist with Environment and Climate Change Canada.

According to Shapiro, “We shouldn’t be surprised to see admixture happening again today as the climate changes and these species are overlapping and encountering each other again in the wild. Climate change allows gene flow to occur between what we think of as different species.”

Climatic shifts that have brought polar bears and brown bears together in the past include glacial periods when sea ice was more extensive, allowing polar bears to mix with brown bears in southeast Alaska, the Kuril Islands, and even Ireland. The brown bears in these locations (now extinct in Ireland) acquired additional polar bear genes on top of the ancient admixture revealed by Bruno’s genome.

As for what brown bears might have gained from their polar bear ancestry, scientists can only speculate. “It’s possible that brown bears got something cool from polar bears, but we can’t say for sure at this point,” Shapiro said.

Finding Bruno’s skull was serendipitous. Coauthors Pamela Groves, Daniel Mann and Michael Kunz from the University of Alaska Fairbanks were walking the Beaufort Sea coastline in 2009 surveying for recent coastal erosion when they stumbled upon the skull resting just above the high tide line.

“Understanding how past changes in climate drove interactions between organisms is critical to predicting how current changes will create new admixtures, increase disease transmission, or impact natural resources or society,” said Leslie Rissler, program director at the U.S. National Science Foundation, which funded the research.

Other coauthors include Gemma Murray at the University of Cambridge; Alisa Vershinina, Megan Supple, Joshua Kapp, Russell Corbett-Detig, Sarah Crump, and Richard Green at UC Santa Cruz; Kristin Laidre at the University of Washington, Seattle; and Love Dalén at the Swedish Museum of Natural History in Stockholm.

This work was supported in part by the National Science Foundation and the Arctic Field Office of the Bureau of Land Management.

The authors declare no competing interests